OMP Sports are proud to announce that the once rookie listed now All Australian and 3 x premiership player Luke Breust, has agreed to a 4 year contract extension with Hawthorn, which will keep him tied to the club until at least 2021.

Luke, who will play his 150th game this season described the contract negotiation as “seamless” and is now just looking forward to playing a major role in taking the club forward over the next few years.

The 26 year old has forged a strong reputation for himself as one of the leagues best small forwards. Averaging 1.9 goals a game at a conversion rate of just under 70%, Luke has epitomised where hard work and determination can get you.

Breust is one of only four AFL players to kick at least 40 goals a season in each of the past five seasons and has no intention of slowing down anytime soon. 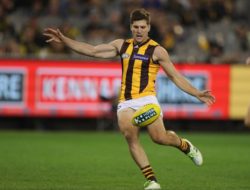 Congratulations again on an outstanding career to date and we can’t wait to see what more you will achieve both on and off the field over the coming years!!