This year has already been a big year for gender equality in the footy world — the biggest in the league’s history.

So when it came time to celebrate International Women’s Day, there was an AFL flavour permeating through the air.

AFLW players now have a voice to reach a bigger audience, with social media a common platform for celebrating the day’s significance.

Viva Energy’s office building at Docklands was also a place for discussion, with the Western Bulldogs’ Tiarna Ernst and Libby Birch speaking about being bold for change.

There wouldn’t be many who have embodied this year’s IWD slogan more than Ernst, who was born on Thursday Island and raised in north Queensland but moved to Victoria to pursue her professional career as a doctor and to improve her football. 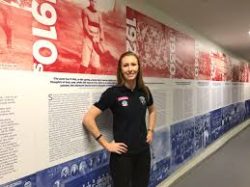 “I guess there have been a few bold moves that I’ve made in my life,” Ernst told Aflplayers.com.au.

“The decision to pursue AFL in Queensland and then moving states — I didn’t know anyone down here in Victoria — but I did it to improve my career and football aspirations.

“It was a pretty scary moment of my life but it turned out to be the best decision I’ve ever made.”

Ernst and Birch have fully embraced the role they play for girls around the country as AFLW players.

Ernst is also eager to see the conditions for female players improve and joined the AFL Players Women’s Advisory Committee last year where she worked with the likes of human rights lawyer and CEO of Grace Papers, Prue Gilbert.

Gilbert facilitated the International Women’s Day event at Viva Energy and said it’s not only females who can empower women.

“It’s kind of a beginning to a new year and a new opportunity. In all the work we do we’re encouraging all men and all women to step out of their comfort zones and think about how they can be bold for change in the name of gender equality,” Gilbert told Aflplayers.com.au.

“I think it’s a day where we can actually pause for the moment and reflect on the history and evolution of women’s rights and look at where we’ve come from and also look at what needs to be done.”

The addition of the AFLW competition has brought a wave of new voices and role models to the mix.

And those voices are infiltrating mainstream media, which Birch noted as one of her favourite aspects to the launch of AFLW.