Adelaide’s defence has had a year from hell in terms of injuries and poor form.

But one shining light has been the emergence of key defender Alex Keath, who continues to rapidly improve after only making the full-time switch to football in 2015.

Since giving up his promising cricket career where he had played alongside some of the world’s biggest names, including Shane Warne, Keath has now played 18 AFL matches in Crows colours. 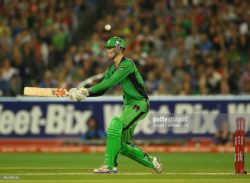 Alex Keth in action at the Big Bash for Melbourne Stars

“We call him the Grandpa back there, he’s an old soul Keathy,” Talia said.

“People forget how good he was as a junior, he would’ve been a first-round pick, he was in my age-group back in ’09. (He) chose cricket and we’re lucky to get him back.

“He’s been fantastic, I’ve done a lot of work with him. He was injured last year, but he’s really started to come on this year in the pre-season, his intercept marking and steady use of the ball.

“He has filled that role that Jake Lever and Tom Doedee have probably left and he’s doing it really well at the moment and we love what he is doing, he’s a star.”

Against the Saints, the tall had 21 disposals at 91 per cent efficiency, clunking a game-high 14 marks, with Melbourne great Garry Lyon suggesting Keath would have to be in the All-Australian discussion as one of the top six defenders in the competition.

“Now he’s ensconced. He’d be in All-Australian discussions now, which is a real feather in his cap,” Lyon said on Fox Footy.

For a side that has had to mix and match their back six all season, Keath has played all six games, intercepting with confidence — something that has allowed him to become a key pillar in Don Pyke’s team.

“He’s got that really nice knack about him to just roll off at the right time and mark it,” Pyke told reporters post-game.

“For a guy that has played 25 games, he’s really evolving which is great.”