CROSS-CODE stars have become part and parcel in the AFL in recent years.

Several players have made the transition to the game, including Geelong’s Mark Blicavs and Collingwood’s Mason Cox, who both began as Category B rookies.

Adelaide unleashed its own Category B rookie earlier this year, when former basketballer Hugh Greenwood made his debut.

But Greenwood won’t be the only Category B rookie that takes to the field on Friday night against Geelong, after coach Don Pyke this week announced Alex Keath would debut and replace Jake Lever (hamstring tightness). 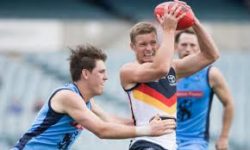 Keath’s debut this week caps off a remarkable, rollercoaster ride to the bright lights of the AFL.

As a junior, Keath was a star at both AFL and cricket, with the potential to reach the highest level in both sports.

Back in 2009, Keath opted to go down the footy path, signing with the Gold Coast Suns as their final eligible 17-year-old. But a short time later, he elected to pursue an opportunity with the Victorian Bushrangers, who offered him a three-year senior contract.

It was a decision too hard to ignore, according to Keath.

“I get asked if it was a difficult decision (to choose cricket over football), but I was pretty lucky to have the opportunity to receive a professional cricket position at the Victorian Bushrangers,” Keath told the Crows’ website prior to playing his first SANFL game in 2016.

“I was rapt once I got that chance. From there, I wanted to try and give it my all.”

Keath would go on to play seven first-class games for the Bushrangers — he made 45 with the bat on debut against a world-class England side at the MCG in December 2010 — while he also featured in a handful of BBL games for the Melbourne Stars under then-captain Shane Warne.

He would then carry the drinks on the MCG for Australia during the Boxing Day Test against India in 2011. But that footy dream still lingered.

After trying his hand at cricket for several years, which included seasons on the English county scene, Keath traded bat and ball for the Sherrin.

Despite previously signing with the Suns, Keath was able to join the Crows as a Category B rookie in 2015, as he had not been registered to any club over the past three years.

So when the 2016 football season commenced, Shepparton-born Keath fully switched his attention to the oval ball, making his debut for Adelaide’s SANFL team against Glenelg in April. The key-position utility made a seamless transition, collecting 15 disposals and a game-high six rebound 50s to help the Crows to a 30-point victory.

Already, Keath was making strong impressions at the Crows.

“He’s been doing most of the training and is enjoying getting back into footy and being around the footy club, which he hasn’t had for a long time,” Crows assistant Scott Camporeale told foxfooty.com.au in April 2016.

“He has a good character and he’s fitted in really well. He’s played sport at a high level even with his cricket. He understands what it takes. His skill, decision making and game sense is at a pretty good level.”

While he may not have shined during his maiden season, the left-footer was a solid contributor at SANFL level, playing 13 games while also battling a back injury. He would return to play a key role in Adelaide’s premiership bid, kicking two vital goals in the second semi-final victory over Glenelg.

By the time pre-season rolled around, Keath was fully prepared for his first full summer of training.

But things weren’t all smooth-sailing early, with the former Murray Bushranger battling a hamstring injury. It was a frustrating blow for Keath, who could ill-afford to miss too many games with his contract set to expire at season’s end.

“Right now, Keathy is just concentrating on putting together solid performances and we will see where he is at,” manager James Vine told Fairfax Media in May.

“His major focus and ours right now is just getting back on the park and stringing some good games together.”

But now, despite his early season troubles, Keath is thriving at the table-topping Crows and will enter Friday night’s clash full of confidence having been named in the best in the SANFL last weekend.

Keath will not only be playing at a familiar venue, having played cricket at the Adelaide Oval before, he will also come up against a familiar foe in Cat Tom Hawkins.

The pair faced off in a charity cricket match nine years ago. On Friday night, they could be in close quarters in Geelong’s attacking 50 in what looms as the game of the round.

It has already been a rollercoaster ride for Keath. But Friday night is undoubtedly one of the peaks of his exciting journey.