Belle Brockhoff bounced back from a slight fall in qualification to finish 6th in the Big Final of the Solitude Snowboard Cross World Cup this morning.

After qualifying in 15th for the finals, Brockhoff placed 3rd in her quarter final and semi-final to book a spot in the Big Final.

A slight fall on an early jump in the final however meant she was unable to keep Eva Samkova from winning the event and leapfrogging her into the world number one spot.

However she didn’t slip far, holding onto the 2nd place in the world rankings after a good day on the snow. 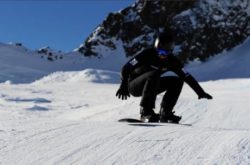 In the men’s field, it was another late qualifier that topped the list of Aussies, with Jarryd Hughes finishing the world cup in 8th overall after placing 2nd in the small final.

Hughes just snuck in to the finals after qualifying in 41st place, but backed up last month’s 4th placing with another top-10 finish today.

The rest of the Aussie men were placed like this: