Belle is back where she belongs

Triple World Cup gold medallist Belle Brockhoff is back on her snowboard at Mt Buller doing what she loves best after her awaited return-to-snow came to fruition today.

Anyone who follows Belle on twitter or Instagram will know how excited the world number three is to be back on snow following a knee surgery in January, which cut her season short before the World Championships and final World Cup.

“I see snowboarding days approaching! ,” an excited Brockhoff said in the countdown to today’s return.

“I’ve never been sent home for injury before and it’s been five months off snow. Longest time ever,” Brockhoff told OWIA.

“This is the first time on snow since my crash at the world champs in Spain in March this year. I’m so excited.”

The Sochi Olympian was in the hunt to take last season’s world number one spot when she crashed at the World Championships in March, leaving the coveted Crystal Globe to her competitors.

Immediate surgery to her right knee required a full ACL reconstruction with the hamstring then a dedicated five months rehabilitation.

“It is what it is and you try your best,” a philosophical Brockhoff said. “I’ve had knee issues for a few years but I’m really happy now.”

“I’m making sure that I’m over prepared – making sure I have more icing on the cake. I told everyone on the day I had the injury that I would come back stronger.”

“Every weak point on my body is being worked on and mentally I feel stronger now too,” she added.

Brockhoff is more than satisfied with where she is currently at and has added meditation into her schedule.

“I’ve been right into meditation during the last few months. Tom Hammond (OWIA psychologist) has helped me fine-tune it.”

The 2016/17 season was a personal best for Australia’s queen of Snowboard Cross, starting out with two Europa Cup victories then capturing two World Cup golds (Austria and Bulgaria) and a silver in Germany before her crash in January.

Despite not being able to compete in the final World Cup, Brockhoff scored enough points to be awarded the World number three spot. 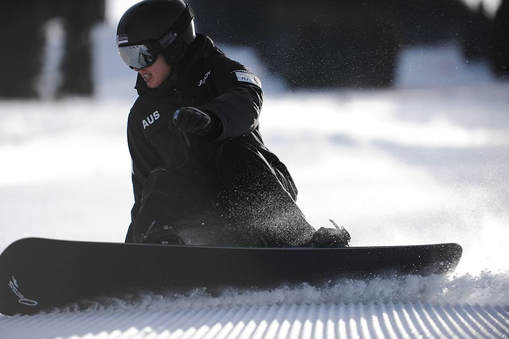 “Looking back, it was a personal best and with a knee injury. Snowboard Cross is incredibly hard and I’m really excited being World number three and making history doing so back-to-back.”

“Last season was a learning curve for me. I had the leader jersey for most of the season, which was really awesome. My main rival grabbed it off me at the last World Cup but it’s still nice coming into the Games with a target on your back.”

“Belle has been meticulous in her rehab so far and has moved onto the next phase now by returning to snow. She will continue to steadily progress her training over the next couple of months,” Merkur advises.

She is aiming for her first 2017/18 First World Cup at Montafon, Austrai in mid-December and a good run-up to PyeongChang.

“When I ride my best on the day I can come away with a medal,” she said. “It’s not easy either. All the competitors will be training their arses off too.”

“You see the same people, same routine, but we get two training days instead and a lot more media.”

“There’s a lot of waiting between features in the PyeongChang course, which doesn’t work well with the winds there and causes a lot of drafting and waiting.”

“’Conditions affect the strategy. If it’s a big head wind, it’s a bit tricky – you’ve got to plan it right.”

“I’m not one to stay in the start gate. I like to rev up and go. I’m not going to rely on others to do the work for me while I sit behind (drafting).”

The Olympic Village atmosphere is one she is looking forward to, having experienced it at Sochi where she came away with an eighth place.

“You get to know your Australian team. It’s actually really cool.”

“The World Cups are like a big family on tour and we just see our own team but when we go to the Games we get to see the other sports.”

Brockhoff has already created Australian Snowboard Cross history but she has a lot more in store.

“I have another ten years in me after this Olympics and I want to bring the younger generation of snowboard cross riders with me. What I do will filter down to the younger riders,” she said.

“I want them to try and beat me and I will do everything I  an for them to overtake me. I want the girls to beat me because it only betters me. There are no secrets and I don’t hide anything. I won’t hold anything back from the younger generation because I want them to have the information.”

“It’s important because one day (not any time soon) when I retire from the sport, who is going to keep it going for the females?”

Brockhoff’s credits the driving desire to encourage other Australians to join her on the podium to her mother, Kristine.
“Mum has brought me up to help others. Sharing is caring. That not only makes you a better person but a better athlete,” Brockhoff said.

There’s been no lazing around between rehab sessions over the past five months. Belle has also been busy expanding her unisex clothing brand Yuzoko, which is the combination of two Japanese words meaning ‘snow’ and ‘family’.

“I’ve always loved to go to Japan snowboarding and I liked the sound of the two words together,” she explained.

The online clothing brand was founded in 2016 and launched in April 2017 and includes long sleeve shirts, tank tops and T-shirts.

“We wanted high-quality products that endure, look good and have a design simplicity. Yuzoko.com is about good fabric with not overly complicated design that can take a lot of washing, gym work outs and be really tough.”

“I’m learning how to market, seeing what works what doesn’t.”