Just over a year out from the next Winter Olympics, the prospective Australian team has made a flying start to the snow season across three continents. 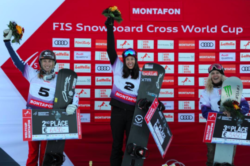 Brockhoff qualified for the ­finals second fastest behind Olympic champion Eva Samkova and demonstrated her increasing mastery of the unpredictable snowboard cross format through three knockout rounds of racing.

She won her quarter-final comfortably, did what she needed to do to finish second in the semi-final and then showed exceptional composure to seal the victory in the four-woman final.

French Olympic finalist Chloe Trespeuch led Brockhoff into the last part of the course and was in the box seat to claim a win as they approached the final jump.

But the 23-year-old Australian kept a clear head and made sure she took the right line into the jump. She nailed the transition and carried all of her speed back onto the snow, which gave her the momentum to slip past her rival and take the prize on the finish line. A jubilant Brockhoff later tweeted: “Couldn’t ask for anything better to start the tour off … happy days.’’

“She made a great pass in the final and took a great win,’’ he said.

The men’s final was even more dramatic. The Australian team had two riders in the four-man final with dual world champion Alex “Chumpy’’ Pullin and X Games champion Jarryd Hughes.

But the start gate malfunc­tioned in the deciding race, opening fractionally late in Pullin’s lane and putting him at a disadvantage.

He then crashed midway down the course after hitting the netting on the side of the course, while Hughes finished third.

However, Wordsworth protested about the start and the race officials ordered a re-run. On the second attempt, Pullin came through to finish third with ­Hughes fourth as American Hagen Kearney claimed his first World Cup win.

“Sick day of racing, stoked to land on the podium at the first stop of the tour after some really tight heats,’’ Pullin said on Twitter.

In aerials, Dani Scott finished her weekend sharing the lead on the World Cup table with Chinese rival Xu Mengtao after each had a first and a second over two days at Beida Lake in China.

Yesterday’s event, a one-jump competition, doubled as qualification for the one-off team event that wrapped up the Chinese World Cup event.

Scott put down a beautiful ­triple-twisting double somersault to win narrowly from Xu, while teammate Samantha Wells performed the best triple-twister of her career to jump onto the podium in third. They then combined with Olympic silver medallist David Morris (fifth in the men’s event) to step onto the podium again in the team event. Despite the disadvantage of having only one man in the three-member mixed team, the Australians finished third (280.73) behind Russia (293.75) and Canada (290.03).

In a demonstration of the depth developing across Aust­ralia’s winter disciplines, nine different athletes finished in the top five at World Cup events in the past week. And snowboarder Scotty James fell just short of the podium at the World Cup event at Copper Mountain in Colorado.