Ben Long’s standout performance against the Giants has been rewarded with a NAB Rising Star nomination.

Long’s 15 disposals, eight tackles and one unforgettable goal saw the 21-year-old get the nod after a drawn-out Round 5.
After four games in his debut season in 2017, Long has played every game this year, improving in each outing before playing a crucial role in the Saints’ draw with the then top-of-the-table Giants.

Long’s bone-jarring tackling and class with the ball in hand shone against the Giants but it was a moment late in the final term that highlighted his true potential.

With the Saints still two goals adrift, Long baulked Phil Davis on the boundary line before bending through a snap from 40m to keep the Saints in the hunt.

Long is the Saints’ first NAB Rising Star nominee since Jade Gresham’s Round 14 nomination in 2016. 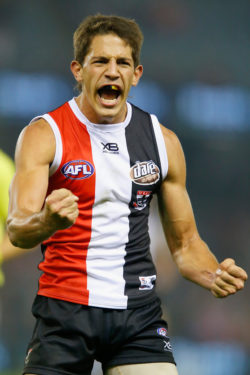