FOR Hawthorn, Sunday’s clash with Carlton represented nothing more than the opportunity to grab more four points, pocket some percentage and not lose any more players to injury.

On that count, it was mission accomplished, with the Hawks cruising to a 72-point win at Etihad Stadium that gets them back in the top eight, 0.8 of a per cent ahead of Geelong.

The pre-game withdrawal of star midfielder Jaeger O’Meara caused a few anxious ripples among the Hawk faithful, mindful that the Blues knocked over the Hawks late last season, but this one was effectively done by quarter-time, as they led by 27 points, having kept Carlton scoreless in the opening quarter of a game for the first time since round 18, 1990.

But while the Hawks escaped unscathed on the injury front, they may well lose midfielder Daniel Howe for at least a game after a clash with Carlton’s Patrick Cripps in the opening minutes of the game that will surely be scrutinised by match review officer Michael Christian. 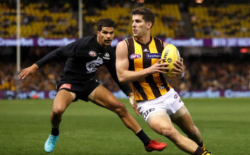 Indeed, it was a spirited opening to the game and the bottom-placed Blues were up for a scrap and determined not to be bossed around, but once the Hawks tidied up their ball use and worked their way through the Blues’ defensive structures, they were on their way to win 18.16 (124) to 7.10 (52).

Carlton’s cause wasn’t helped by first-half game-ending injuries to Zac Fisher and Liam Jones, and the Blues showed great pluck in the third when they rammed on four straight goals to get the margin briefly under six goals, a burst which included a freakish first AFL goal to Cameron Polson after a leg break that Shane Warne would have been proud of.

However the Hawks had done enough by then and they meandered to a win that did the job, but contained few style points.

Luke Breust led the Hawks with five goals and Paul Puopolo kicked four, while Jack Gunston and Ryan Schoenmakers booted two each, but what was most pleasing for the Hawks as they enter their most crucial stretch of the season was that the backline kept the Blues largely at bay in the absence of injured star James Sicily. Ben Stratton, Blake Hardwick and James Frawley were all in good touch. Breust’s 5 goals against the Blues, now has him on 42 for the season and placed third in the Coleman Medal race. Only Ben Brown and Lance Franklin have kicked more thus far in season 2018.