From far away it looks like Jock Landale has taken to professional basketball with aplomb.

In his first season in Europe, Landale has emerged as a rising star playing with Serbian club Partizan Belgrade and made his Australian Boomers debut in February.

The 23-year-old was a late bloomer, rising from Geelong Grammar to US college St Mary’s where he starred before graduating last year.

He is now on the edge of the NBA with teams looking at him closely for next season. But Landale’s top goal is not to become a millionaire in the US.

“From day one my biggest goal wasn’t to make a bunch of money or make the NBA – it was that I want to get to an Olympics and represent my country,” Landale said.

“I know this isn’t that just yet but I’m on the right track.” 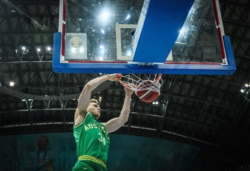 Landale achieved a big milestone when he was named in coach Andrej Lemanis’ 18-man selection squad for this year’s FIBA World Cup in China.

Landale is the stoic type but admits he shed a few tears at the news he was within six players of making an Australian team for a major tournament.

“I’ve achieved a few things in my life that I’ve set out to do but this was the first one that really broke me down emotionally,” Landale told The Age from Serbia this week.

“I had a teary over it with my family as it has been such a rough year for me. To tough everything out, come through it and make that squad was something real special for me and I’m excited to play alongside some of those [NBA] boys at camp.”

Lemanis will officially name his squad on Thursday with Ben Simmons, Joe Ingles and the bulk of Australia’s NBA players named along with Landale and some other hopefuls.

Dallas Mavericks forward Ryan Broekhoff has withdrawn to remain with his wife as she is expecting their first child while Utah Jazz guard Dante Exum is still recovering from a knee injury that ended his NBA season early.

Landale will be seen as one of the selection bolters but he is not a complete shock considering how well he has played with Partizan in the respected Adriatic League along with Euro Cup games.

But behind his good numbers was the isolation of spending his first year in a non-English speaking country.

“Basketball is the best part of being here,” Landale said.

“It was super tough to adjust to, it’s pretty much like play-offs for 10 months straight and the physicality is tough, especially coming out of college.

“But the off-court stuff was where I was really tested in living by myself in complete isolation.

“There was a time there where I thought it was going to be too much but I’m very glad I toughed it out.”

The US college lifestyle saw Landale always surrounded by friends but in Serbia he had to push himself to leave his apartment.

“I had never been alone in two, almost three years. I always had my mates or my girlfriend with me but this was complete isolation,” he said.

“One of my big things was going out to the local coffee shop for a few hours and reading a book or calling someone back home. Finding little things to churn up the time.

“For me it’s not the city that makes the living situation, it’s having friends and people to share common experiences with.”

Joining a young Boomers squad in Astana in February reminded Landale how much fun it was to join up with his countrymen and while selection camp with be demanding, he can’t wait to experience that again and he will be playing to earn a place in the final roster of 12.

The Boomers will name their full squad on Thursday with their selection camp in Melbourne in August.