With only 50 days until Collingwood line up for their round one opener against Geelong, Collingwood have announced their 2019 AFLW Leadership Group. 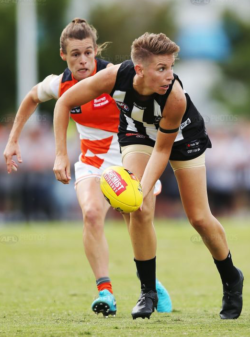 (Emma Grant in action against GWS)

The club’s inaugural captain was thrilled to find out she would lead the side for a third consecutive season.

“Leadership is a great strength of the Magpies’ AFLW team and I’m humbled to be selected as captain again,” Chiocci said.

“I’ve really enjoyed leading alongside Emma, Ash and Britt again and can’t wait to see what Sarah and Chloe will bring to the group. 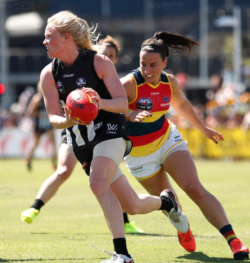 “The leadership selection process was a fantastic opportunity to reflect on our leadership strengths and being selected is great validation for us as leaders; especially when it is based on peer nominations.

“We’ve got a few fresh faces and plenty of young talent in the team so we’re all keen to support and lead the group to be strong as one.”

General Manager of Women’s Sport Jane Woodlands-Thompson oversaw the process which involved peer and self-nomination based upon set criteria as well as an interview.

“We wanted to create a process that not only uncovered the most appropriate leaders for the team, but also educated the group on what it takes to be a leader at the Collingwood Football Club,” Woodlands-Thompson said.

“With 13 players between the ages of 18 and 21 in our AFLW team, we think it’s very important for our young, emerging players to understand what it takes to become a great leader.

“Steph is a seasoned leader and it’s with great pride that she has been appointed as captain along with Emma, Ash, Britt, Sarah and Chloe in the leadership team.

“It’s a great dynamic within the group and we think we’ve struck a balance of experience, knowledge and skills along with representation of the whole team.”