Mitch Hannan’s intensity around the football and ability to break lines and hit the scoreboard has helped place Hannan amongst the AFL’s best first year players in 2017. In fact according to AFL Player Ratings, Mitch is currently ranked the second most damaging player amongst the 2016 draftees. Averaging over a goal a game, Mitch has played vital roles both across half forward and through the midfield for The Dees so far this season. 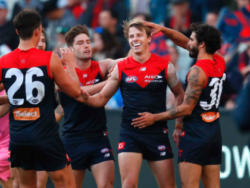 From playing VAFA football only a few years ago with St Bernards, Mitch’s ability to learn and adapt to the fast tempo of AFL football in just his first season has been quite incredible.

With a grudge match this Sunday looming against The Blues, Hannan and The Dees must bring their ‘A’game if they want any chance of securing a top  four finish and double chance come finals time.