Hannan on the right path

Melbourne’s player/coach performance manager in Brendan McCartney has been very pleased with Mitch Hannan’s transition into a full-time AFL environmnet. Despite a reduced training load pre-Christmas while getting over a shoulder injury, Mitch hasn’t put a foot wrong and has been working diligently to earn the trust and respect of his fellow teammates. 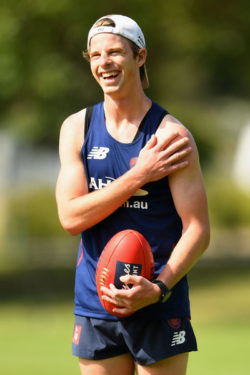 McCartney had only good things to say about Hannan, including high praise when it came to reviewing his recruiting tapes from last season in the VFL. With a willingness to work his way through the grade, Mitch has shown an application and commitment to do all he can to make it as an AFL player. Furthermore his discipline off the field has been first class. Mitch is an undoubted talent, which was seen during his VFL finals campaign with Footscray and the Dees are very excited to see their first selection in the 2016 AFL Draft out there playing this coming season.