In for the Long haul

Long will remain in red, white, and black until at least the end of 2022 after putting pen to paper on the eve of Round 1. 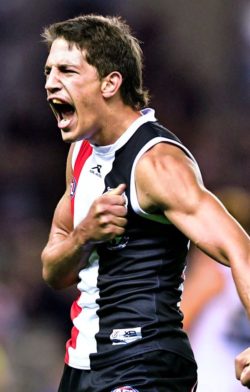 The 21-year-old was a shining light early in 2018, before a foot injury curtailed his season.

Long starred in Round 5 against the Giants, earning a Rising Star Nomination, and delivering one of the highlights of the season when he nailed a clutch goal late in the final term.

List Manager James Gallagher said Long was an important signing as the Saints look to build a strong nucleus to drive the club forward.

“Before the foot injury, Ben really showcased the type of player he can become for the Saints,” Gallagher said.

“He’s had a strong summer and will be a very good player for a long time to come.

“He’s predominantly played as a forward in his career to date but has the ability to play in a variety of positions with his speed and skills.”

Long said he was excited by what the future holds at the club.

“I’m really enjoying my footy at the Saints,” Long said.

“We have a great group of guys coming through together, and I’m excited to be part of that.”

Long has played 14 AFL games after being drafted by the Saints with pick No. 25 in the 2016 AFL Draft.