Jetta ready to shoulder the burden

MELBOURNE defender Neville Jetta has played down concerns about a shoulder injury that flared in Friday night’s 29-point elimination final win over Geelong.

Jetta left the field in some pain in the first quarter of the clash against the Cats after falling awkwardly on his right shoulder.

After being assessed, the miserly backman returned to the ground soon after, and played a key role in Melbourne’s first finals victory in 12 years.

Jetta has declared he is fit and raring to go for the club’s semi-finals clash against Hawthorn at the MCG this Friday night.

“It (the shoulder) got caught in an awkward position,” Jetta told AFL.com.au.

“I’ve had three shoulder surgeries on my right side and heard a bit of a crunch when I hit the ground and I just wanted to make sure I was all right.

“I think the physios probably got a bit more worried than me. I just felt a little bit of discomfort, but I was fine to get back out there, and I was ready to go.”

Jetta had just seven disposals in the Demons’ win, but he made a big impact winning some important one-on-ones against Cats superstar Patrick Dangerfield. 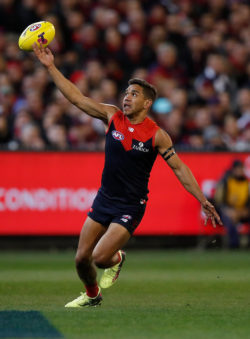 “Down forward (he) can keep you on your toes a lot, but I just backed myself in,” Jetta said.

“I’ve been doing a lot of work out there after training doing one-on-one stuff with a few of my teammates.

“It’s also about not wanting to get beaten. My role is to stop those midfielders who can come down there and kick goals, so I didn’t want to let the team down.”

Jetta also laid a monster tackle on Joel Selwood in the first term, with the force of the impact enough for the Geelong skipper to involuntarily let spit fly out of his mouth.

“You want to be able to start the game off well and that was my opportunity to lead and get myself in the game,” Jetta said.

“I just had to execute as well as possible and I was happy I was able to.”

Jetta expects to go to All Australian small forward Luke Breust when the Demons do battle against Hawthorn on Friday night.

Breust was well below his best in the Hawks’ qualifying loss to Richmond, missing a sitter from the top of the goal square. 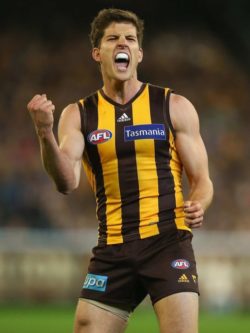 However, Jetta knows the star Hawk can be a handful, with Breust booting 53 goals from 22 matches in the home and away season,  ranking him fifth in the Coleman medal race.

“He’s been the in-form small forward of the competition this year and he’s being doing it for years,” Jetta said.

“I’m looking forward to another challenge and whether it’s on him or on someone else I’ll just perform to my best.”