Jock Landale on a pathway to the NBA

Australians are well-known for their tenacity, yet 23-year-old centre Jock Landale takes it to a whole new level as The Pick and Roll found out in speaking with the young Victorian earlier this week.

After a stellar four years at Saint Mary’s College, Landale went undrafted before taking part in NBA Summer League with the Atlanta Hawks this year. While the NBA has not yet come calling, his potential did not go unnoticed, signing a two-year deal with Partizan to play in the Adriatic League (ABA Liga) and EuroCup. While the EuroCup is one of the elite leagues, the ABA is a competition in which many Australians have thrived in before him — think Jonah Bolden — Landale described it as gritty and unlike anything he had ever experienced before.

“The ABA is a very tough, slow-style league — very physical — and doesn’t allow much freedom for you to do what you want,” explained Landale. “All of the guys in the league have been playing for a long time and are very smart, they hold you up.

“The teams we play against will kill the shot clock. You’re playing against twenty-second offence while running defence. They don’t allow you to get out and into transition, and have tricks to grab you and hold you, and it slows you down. It was very hard for me to adjust to it initially, but now that I have been out here for a couple of months, it allows things to slow down and figure out ways to add that to my game.”

As Landale spoke, it became more apparent that he was an astute student of the game. He had been observing, learning the finer points so he could add to his game and adjust to different styles of play and conditions – the exact very thing he is experiencing with his Serbian outfit.

“It is teaching me a lot about the game of basketball,” further explained Landale. “It has been brutal the first few months, but with a new coach and his coaching style, things are starting to become a little easier for me.”

Prior to speaking with Landale, I knew very little about Partizan and how passionate the club and its fans are, roots that have been established over decades of excellence, with a proud tradition and history. Landale filled me in on the true extent of the club’s faithful. 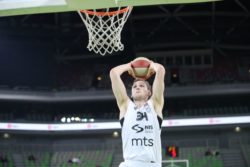 “Playing for Partizan is crazy!” Landale enthused. “It’s one of the cooler experiences I have ever had, but [it] can be very, very intimidating at times.

“When we lost to our big rival Red Star, there were fights breaking out in the parking lot. [I’m] not making this up, but I am 95% sure I almost had a gun pulled on me by a guy who approached me with his hands in his jacket yelling at me aggressively. Luckily there were around 150 police in riot gear to try to keep the peace there to take care of that.

“At the end of the day, I wouldn’t want to play for any other fans in the world. These guys live and die by this game, and for me to be able to rely on that crowd energy every night, home or away, is insane. Throughout the city there is nothing but love from our fans. To be able to be here for my first pro season, I would never trade it for anything.”

With a change of coaching staff, the rising star is confident of what he can achieve with his current club.

“My initial coach here ran a very structured system but was fired six weeks in,” shared Landale. “Our new coach is more modern in the way he plays so we have a lot more opportunity to play.

“If you stuff up, the fans will let you know! There are certain players who will let you know, and we have a coach who will definitely let you know. He is teaching me a lot, and you can see it in not only my own numbers, but the entire team. I want to stick with him for the moment, soak up as much as I can from him, and it will do the world of good for my career.”

Fellow Australian centre and 2012 London Olympian Aleks Maric launched his pro career with the same club in 2009 after a standout collegiate career at Nebraska. Such was the impact Maric made, he went on to win the Serbian League, Adriatic League and was named All-EuroLeague First Team in the same year. Landale was proud to be able to continue the Australian connection with one of Serbia’s traditional superpower clubs, yet was focused on not allowing it to slow his path to success down.

“Absolutely. When I first got here a lot of people I spoke with made reference to that connection [with Maric] or something similar,” Landale went on to explain. “There is a lot of fan love for Australian players here. It made it such a great way for me to come from as it didn’t force pressure on me, but I built on it from there.

“I am pretty good with blocking outside noise and any pressure which may come from anyone regarding my play. I read very early on that there were expectations placed on me due to the success of past Aussies, but I stay in my own world, and am good with that.”

While the opportunity to prove himself in the NBA has yet to materialise, Landale remains optimistic of his chances in the future. For now, he is focused on establishing himself as one of the best centres in Europe and help his team win, knowing on court success will provide him with further opportunities.

“My strength coach has really good connections with a lot of scouts and I get told that there are a few [NBA and EuroLeague] clubs circling and keeping tabs on me, talking about my increased skill and productivity,” Landale added. “But the same goes with EuroLeague, where I have also been told of growing interest.

“Right now I am locked in and focused on Partizan. For now I need to focus on continuing to win with my team as we are on the brink of top four in the league as well as EuroCup.”

The positive feedback continues to flow for Landale, with his work rate and increasingly diversified skill set gaining plenty of attention. While many critics questioned his ability to shoot the three-ball at pro-level, Landale has since been able to go some way to quell those concerns in his short time at Partizan. The 6’11 big man has demonstrated he can step out to hit from beyond the arc, making 38% in the ABA and an even better 41.7% in the EuroCup. While it is a small sample size (8-33 3PT combined), Landale explained that not only can he stretch defenses with his shooting, but he offers skills in other areas that would be valuable to any NBA team. 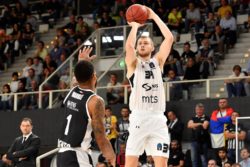 “My three-point shooting and shooting ability has always been there I feel. While I was at college, my team didn’t need me shooting threes because we had so many elite shooters around me. My team now needs me playing pick and rolls or short roll plays, but eventually my coach may ask me to open up the game and shoot threes. If a coach needs me to do that or anything else, I feel like I can provide that for my team.

“At the end of the day I don’t go out thinking, ‘I have to shoot a certain number of threes so the NBA notices me’. I feel I do a lot of other things a lot better which allow me to make my mark on a game – rebounding, passing and finishing around the rim.”

Landale has been doing just that. He is delivering 11.9 points, 6.7 rebounds and 1.8 assists per game in the ABA, and 11.4 points, 7 rebounds and 2.1 assists in the EuroCup, scoring his points at an efficient clip too just like he did at Saint Mary’s, where he was arguably the best centre in college basketball.

The end goal however, is simple.

“One day I want to get to the NBA. I know I wasn’t playing my best in Summer League, but at the end of the day I feel I should have ended with a two-way deal. But it didn’t happen and I am very happy with where I landed here at Partizan. If I keep up my patience and hard work as the most important factors in my development, I will get there.

“While I am relentless in pursuing my dream, I have to be patient and continue to understand this game the best that I can. I have set myself a two-year target in achieving my goal and playing in the NBA.”

With Landale’s undeniable work ethic and steadfast focus, it is almost certain that he will eventually receive his shot at the NBA.