Langford’s ‘step forward’ in bid to be like triple-flag stars – AFL.com.au 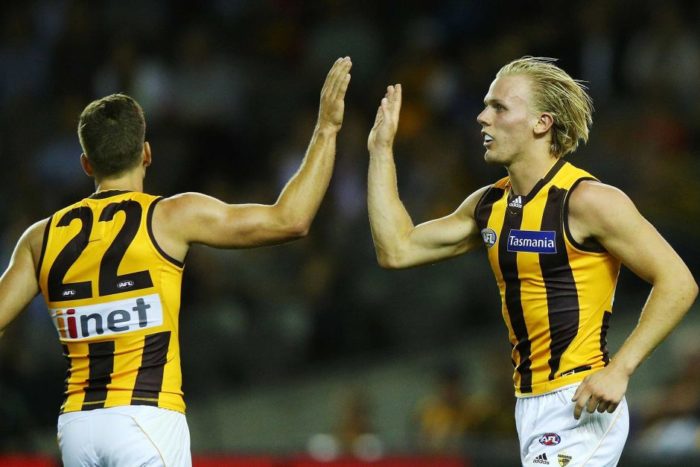 HAWTHORN young gun Will Langford says he’s trying to emulate Luke Hodge and Sam Mitchell’s consistency in a bid to build on his breakout 2014 finals series.

Langford returned for his first match in a month in the Hawks’ 38-point win over Essendon at the MCG on Saturday, slotting back into the side with 15 touches, six tackles, four inside 50s and a goal.

The 22-year-old’s solid form – he averaged 21 touches – saw him play every game until round eight, before a corked calf stalled his progress and forced him to earn back his spot in the powerful line-up through the VFL.

Having grasped his opportunity against the Dons on Saturday – following Cyril Rioli’s late withdrawal due to the death of a close friend – Langford said his performance felt like “a step forward”.

“I’ve not played 30 games yet, really, so it’s just a matter of – like any developing player – you maybe start to find what your strengths are and you try to play to that week-in, week-out,” Langford told AFL.com.au.

“Guys like Sam Mitchell, Luke Hodge – the really elite performers in our team – are the guys that I probably focus on.

“What makes them so good is they’re outstanding players but they do it every week, they back it up.

“That’s just the next part of my development as a player, just trying to bring that consistency and energy week-in, week-out throughout the footy year.”

Langford was a revelation in last year’s finals series, averaging 23 disposals and booting five goals – including three in the Grand Final belting of the Sydney Swans in just his 20th career match.

He could become a dual premiership player later this year – his father, Chris, played in four flags for Hawthorn – with the Hawks building ominously towards September.

A fourth straight win on Saturday lifted Alastair Clarkson’s outfit up into the top four, while it also exacted some revenge for a painful two-point loss to arch-rival Essendon in round two.

The enmity between the clubs, built during Chris Langford’s playing days in the 1980s, still burns fiercely, as evidenced by Clarkson pinning the back page of The Age newspaper – detailing Essendon coach James Hird’s hatred of Hawthorn – to the changeroom whiteboard pre-match.

While Clarkson doubted the tactic worked as Essendon got on top early in Saturday’s match, Langford said it was a warning to expect a brutal contest.

“Yeah, I’m sure lots of coaches do it. It was just to say ‘Essendon are coming hard, watch out’,” Langford said.

“Particularly after last time and we just wanted to come out and grind and play tough, hard footy and that’s what the boys did.

“After I suppose losing to them early in the year, and trying to string games together, it was really good for the team to get another win today, which was four in a row.”