ST KILDA’S third-and-fourth-year players have headed to the Northern Territory in a bid to kick-start their pre-season campaign.

It’s a similar camp to what the Saints had last year, with Long playing host as he took the group through the Northern Territory and his home in the Tiwi Islands.

The club’s first-to-fourth-year players returned to RSEA Park last Wednesday, with the rest of the group due back next Monday.

After a dismal campaign that saw the club finish 16th with four wins and a draw, Long told AFL.com.au his peers needed to be at the forefront of any turnaround.

“Us third and fourth years, we are the future of the club, so we’ve got to drive those standards,” Long said.

Being asked by the Saints for a tour of where he grew up showed Long how much respect the club had for him, despite his inexperience.

“It sort of hit me, in terms of the club coming to me and saying ‘Can you take us up to Darwin and show us where you’ve come from?’,” Long said.

“My family background, coming from the Tiwi Islands, was a great experience, and it meant a lot to me for the club to be doing that.”

Those connections are part of the reason he’s enjoying his time at St Kilda. Long is contracted until the end of 2019 and list manager James Gallagher recently told the Road to the Draft podcast he’s had “preliminary discussions” with Long’s manager about extending that deal.

The 21-year-old hasn’t given it too much thought yet.

“They gave me an extra contract in my first year. I’m loving it at the Saints at the moment and I’m not thinking much about that stuff,” Long said.

There was interest from Melbourne and Essendon in Long during the NAB AFL Trade Period, which St Kilda and Long were quick to shut down.

For the man himself, it was weird having that play out in the media.

“It was pretty (surprising) … I wasn’t out of contract with the Saints. I think it was the Demons and the Bombers that were showing interest,” Long said.

“They were sort of saying that I was up for a trade and that, but I really wasn’t. I think it , I’m not too sure.”

It’s not hard to see why St Kilda wants to lock Long down. He showed star potential in his 10 games this season, adding toughness, speed and class up forward, in a campaign interrupted by a fractured metatarsal in his right foot. 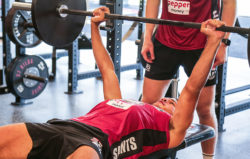 His brilliance was encapsulated by a moment late in the round five with Greater Western when he marked about 45m out close to the boundary and faked a drop punt before running around Phil Davis on the mark to snap an outrageous goal. It was an instinctive decision.

“Once I marked it, I thought I was a fair way out. Straight away, I just thought ‘I’m going to run around this bloke’,” Long said.

Getting fitter is a focus so he can spend more time in the midfield, although Long will largely be in attack next year.

He’s determined to improve and one day emulate what his cousin Willie Rioli did with West Coast in winning the premiership.

Long admitted to being “jealous”, but it was a significant moment for his community.

“He made the Tiwi Islands proud,” Long said.