It was another excellent year from Breust, who produced a fifth-consecutive 40+ goal season and continued his excellent partnerships with Cyril Rioli and Paul Puopolo. 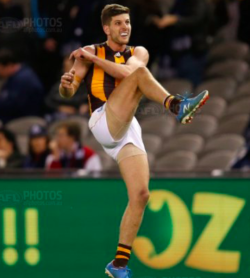 The three-time premiership player continued to mix forward line duties with time in the midfield, averaging 15.7 disposals and nearly two goals per game.

His best performance for the season came against Richmond in Round 7, when he kicked a bag of six goals from just 14 touches and proved the difference between the two sides.

Coming from a rugby background, the physical side of the game is no worry for Breust, who laid 94 tackles for the year at an average of just under four per game.

There is no denying Breust’s importance to Hawthorn with what he brings both to the forward line and midfield, and with Jarryd Roughead still some time away from a return, his goal kicking contribution proved more important than ever this season.

To watch Luke’s highlights, go to;