Mitch makes most of magic moment

A COFFEE catch-up with a mate and some relaxing time at home may not have calmed the pre-match nerves of AFL debutant Mitch Hannan, but the half-forward didn’t let it show as he booted two goals in an impressive first-up display against St Kilda at Etihad Stadium on Saturday.

Hannan, who played in Footscray’s VFL premiership last year, returned to play at Docklands, where he experienced another outstanding win – Melbourne’s first over St Kilda in 11 years, ending a 14-game streak.

The recently-turned 23-year-old said it was “pretty unreal” to be part of the red and blue’s 30-point win.

“I was pretty nervous this morning – I’m not going to lie. With a later start, I was trying to kill some time and I went for a coffee with a mate and then I found myself at home thinking about the game, probably too much in the end,” he told Melbourne TV.

“I got to the game and then the nerves settled a little bit – once you get to see your teammates and the coaches, and you start to get into your routine, then it all falls into place.”

“It was a relief [to get my first touch]. It was a handball and it was early, which got the monkey off the back a little bit.”

Hannan, who also had 16 touches, five tackles and five inside 50s, said he was happy with his first-up effort. 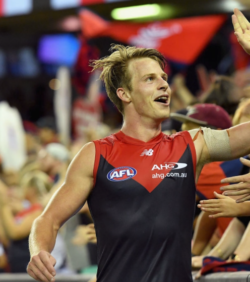 “I’d definitely take that. I was due to play a half-forward role for the majority of the game, so if I could kick a couple of goals – that was my aim,” he said.

“It was a bit of relief – I was pretty heavy in the legs, I’m not going to lie. When that final siren went, it was just good to know we got the victory and I was off to the Gatorade shower.

“It was really good. In your first game, we always want to get a win, so you can experience something like that, so I’m just thankful for the opportunity and it was great that everyone got around the four debutants and celebrate the win.”