Mitch to remain at Melbourne

FORWARD Mitch Hannan has signed a two-year contract and will remain with Melbourne until at least the end of the 2020 season.

“Mitch was able to have immediate impact on our team last year, coming in as a mature-age player,” he told melbournefc.com.au.

“Mitch’s combination of speed and endurance allows him the flexibility to play as a forward and through the midfield. 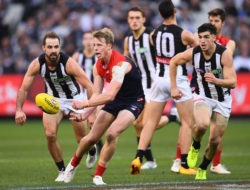 “We look forward to Mitch developing his game further and building on his first season.”

Hannan made his AFL debut against St Kilda in round one last year, booting two majors, and finished the year with 20 games and 22 goals under his belt.

The almost 24-year-old – his birthday is on March 9 – joined Melbourne from Footscray, where he played in the club’s 2016 VFL Grand Final win over Casey Demons.

Hannan started football as a junior with Gisborne, before playing at Woodend, and then St Bernard’s in 2015, where he played in a flag.

After impressing with the Bulldogs in the VFL, Hannan attracted the interest of several clubs and was secured by Melbourne with its first pick in the 2016 NAB AFL Draft at No.46.

He combined his time in the VFL with commercial drafting, before gaining his opportunity in the AFL.

An impressive young man, Hannan looms as an important part of Melbourne’s future. 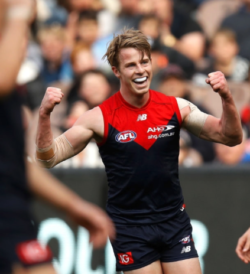