Having been placed on the Crows rookie list as a Category B player in October last year, the former first-class cricketer did not take long to adjust to life as a professional football player, despite having not played the sport since 2010. Playing in Adelaide’s SANFL team, Keath slipped seamlessly into a Key Position role down back and became a vital part of the teams structure as the season went on. Now with a year under his belt and with the knowledge and skill set that he has been able to learn throughout 2016, things are only looking up for Keath as he endeavours to take his game to another level in 2017 and break into what has become a very formidable Senior Adelaide Crows side. 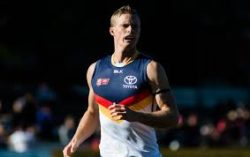