Small Hawk up there with the best

ARE YOU from the camp that thinks Eddie Betts is comfortably the game’s best small forward in the past decade?

Not so fast, at least until you’ve given one Hawk some serious consideration – and it ain’t Cyril Rioli.

Hawthorn’s resident sharpshooter and 2018 Coleman Medal contender Luke Breust is the man in question, closing any perceived gap to the Crow with his devastating efficiency. 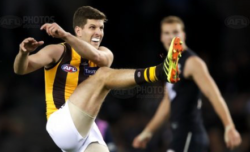 Both stars were discovered on the draft scrapheap: Betts, 31, was a pre-season selection, while Breust, 27, was a rookie pick.

Betts is No.1 among small forwards if only total goals and goal assists are taken into account since Breust played his first match in 2011, with the Hawk second in both.

The picture becomes murkier once you dig deeper, including the fact Breust averages almost one score involvement per game more than Betts.

The modern small forward is unrecognisable, in some ways, to even the days of former Saints champion Stephen Milne, who did his work between 2001 and 2013.

Goals are still great, but the job description these days, not just at Richmond, places every bit as much importance on their ability to pour on the pressure.

They are expected to be ‘two-way players’, to borrow from NBA parlance.

That’s where Breust sits favourably in AFL.com.au‘s handpicked field of little men in attack, behind only his ex-teammate Rioli.

The triple premiership star booted an extraordinary 109 goals against only 31 behinds and 12 misses across 2014 and 2015, the final two seasons of Hawthorn’s three-peat.

Breust is on track to kick 50 majors for the third time in his career this year – and he has never slotted fewer than 30 – whereas Betts has achieved that feat on five occasions in six extra seasons.

Milne did it six times and Rioli never reached that plateau, while Johnson (three), LeCras (two) and Thomas, Wingard and Dickson (one each) are other players who have managed that feat before.

His forward-50 disposal efficiency of 65 per cent also ranks eighth of the top-200 ball winners in that area in the past eight years.

A second All Australian nod seems certain, but don’t rule out Breust becoming the first small forward since Leigh Matthews in 1975 to win the Coleman Medal.

That might just seal the deal on this topic.