Tiarna Ernst was amongst the AFLW’s best players in 2017

The Western Bulldogs are tied with Melbourne for the highest number of elite level players in the League according to Champion Data’s 2018 AFLW Prospectus, with each having five apiece.

Each year at AFL level, Champion Data analyse every team and all listed players before releasing the official prospectus ahead of the season, and for the first time have turned their attention the women’s league with the Dogs and Demons coming out on top.

Tiarna Ernst, Emma Kearney, Ellie Blackburn, Katie Brennan and Hannah Scott all rated as being in the top 10% of their positions based on the 2017 season.   Defender Nicole Callinan just missed out on the group, rated as Above Average, placing her in the top 35% of her position. 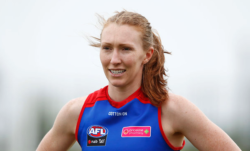 AFLW premiers Adelaide have two players rated Elite, as do the Lions, Carlton and Fremantle.

The Dogs open their season on Sunday, February 4  at Victoria University Whitten Oval.