The Australian Boomers will welcome ten new faces for the sixth and final FIBA World Cup qualifying window when they visit Kazakhstan and Iran next week. 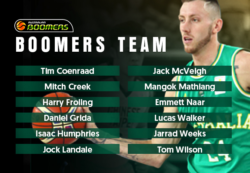 With the last window falling prior to the NBL playoffs, coach Andrej Lemanis and the Boomers coaching staff have liaised with the league and it’s clubs to not feature players set to compete in the playoffs.

“The NBL and clubs have been amazing in their support of the national team,” said Lemanis.

“We were conscious to work with the clubs, ensuring the welfare of all players and minimising the disruption for those players in the NBL finals. As a result, it opens up a wonderful opportunity for some new talent to shine.”

Tom Wilson, Emmett Naar, Harry Froling, Jack McVeigh and Isaac Humphries have previously represented Australia at FIBA Under-19 and Under-17 World Cup’s while it will be the first time Tim Coenraad, Daniel Grida, Jock Landale, Mangok Mathiang and Jarrad Weeks pull on the green and gold in a FIBA event.

“To give these guys exposure at an international level is exciting for them and it’s exciting for us as a coaching staff,” said Lemanis.

“We identified at the beginning of the qualifying process that our depth of talent would be tested like never before and it is important for the future of our sport that we continue to develop and grow as broad a base as possible.

“We want the cupboard to remained stocked, so to speak. Giving this 12 the opportunity to experience this level of play is important.

“This situation also gives us the chance to connect with guys like Mangok, Jock and Isaac who have been overseas. For them to make themselves available is phenomenal and I look forward to working with them and seeing how they perform on the international stage.” 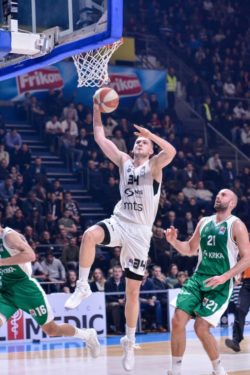 Jock Landale in action for Partizan

Landale and Mathiang link up with the Boomers from stints in Europe while Humphries joins fellow NBA G-League star Mitch Creek in the Australian side and the collaboration of international franchises including the Erie Bayhawks, Guerino Vanoli Italy and dePartisan Serbia has helped the selection process immensely.

“Mitch bleeds the green and gold. He’s been doing wonderfully well in the US but for him to now be back in a position to represent Australia is awesome. I’m excited to see his development and his experience will be an important piece for the team in these two games.”

The Boomers have already booked their spot in the FIBA World Cup with two qualifying games remaining but seeding in their group remains important while Lemanis is keen to finish off the qualifiers by extending their winning streak to six.

“The fact that we have qualified helps, but we are still there to win and of course we want to represent Australian basketball on the world stage the right way.

“This team of 12 has an opportunity to show what they have to offer on the world stage, and with the World Cup the next international event it is a great time to be playing for Australia.

The Australian Boomers team for the sixth window of FIBA WC qualifiers: