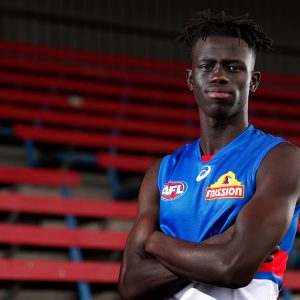 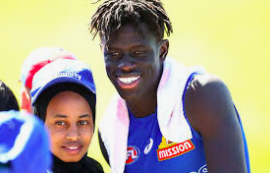 Buku Khamis became the Club's first Next Generation Academy recruit, added to the Club's playing list as a pre-selected rookie in November 2018. A relatively late bloomer in a football sense, Khamis, a refugee from South Sudan, moved to Australia in 2006 with his family and took up AFL in his last year of primary school. He is a product of the Dogs’ Next Generation Academy, and was a participant in the Western Bulldogs Community Foundation’s Ready SETTLE Go program. The athletic defender has the ability to take on the game with his impressive running ability, and possesses clean skills. He is a strong intercept mark and reads the flight of the ball well. Khamis represented Vic Metro and was awarded All-Australian selection in 2018. In his first season at the Kennel, Khamis made 18 VFL appearances for the Footscray Bulldogs, however did not breakthrough for an AFL debut.